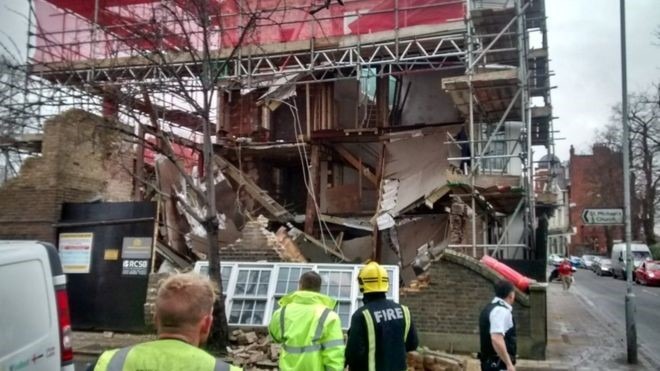 A house once owned by the singer Duffy has collapsed into a pile of rubble.

The property in The Terrace, Barnes, south-west London, was reportedly undergoing a basement extension when it collapsed at about 11:53 GMT.

Aimee Duffy has been registered at the address for the past four years on the electoral roll, but local estate agents said she had sold it.

The front elevation remains in a precarious position, London Fire Brigade said. No-one has been hurt.

Three people are reported to have left the neighbouring home, the fire brigade said.

The detached Georgian property has six bedrooms, four bathrooms and three reception rooms and sold in May 2014 for £3.5m, according to property site Zoopla.

Duffy is a Welsh singer-song writer who shot to fame in 2008 with the single Mercy and her debut record Rockferry won a Grammy award.
Stephen Beard, who lives nearby, was walking his dog when he saw the building collapsing.

He said: “I was able to get my camera out and take a photograph, which shows the dust blowing up from the collapsed building.
“It was quite dramatic. I was going along for a peaceful walk and then this happens.”

Val Sancourt, from the Richmond campaign group Safer Basements, told the BBC there had been a proliferation of basements in the area, many of which had “caused substantial damage.”

The group said it was aware of windows being pushed out of alignment, doors jamming, large cracks in walls, a ceiling caving in, flooding and gas pipe leaks, apparently linked to basement extensions.

She said: “We’re not saying no basements ever, anywhere. We’re not anti-basement per se. We’re saying before you put in a basement you need to have had proper hydrological investigations.

“If it can’t be proved to be safe then applications should not be granted. It’s got to the point in Barnes where everyone, as soon as a house is sold, is terrified.”