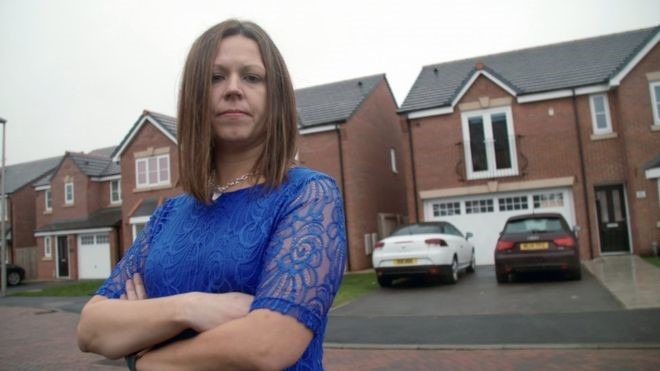 When putting pen to paper to buy a new home, most people expect to know how much they will need to pay to own it outright. But thousands of families in England and Wales are discovering the new-build houses they bought are not all they seemed

Katie Kendrick bought her new-build home from Bellway in Ellesmere Port, Cheshire, three years ago for £214,000.

“It was supposed to be our forever home,” she tells the BBC’s Victoria Derbyshire programme, sitting in the living room of her four-bedroom house. “But it’s the biggest mistake I’ve ever made.”

Katie knew the house was leasehold – meaning she owned the property for the 150-year length of her lease agreement – but claims she was told by the sales representative that because of the long lease it was “as good as freehold”; a property owned outright.

She thought nothing of it, and says she was told she would be able to buy her freehold after two years, believing it would cost between £2,000 and £4,000.

But a year and a half later, she received a letter from Bellway saying her freehold had been sold to an investment company, which was now quoting £13,300 for her to buy it.

“At the moment I feel completely blind and in a corner and don’t know which way to turn. There’s legal action but that is very costly,” she says.
The The Money Advice Service states:

What Bellway has done – selling a new home as leasehold, and then selling the freehold separately to an investment company without informing the family living there – is not illegal.

In England and Wales, the “right of first refusal” applies to flats, but not houses. So it was not legally obliged to tell Katie it would do this.

For an investment company, buying groups of freeholds is a safe long-term investment. Receiving regular payments for ground rents – over leases that number well over 100 years – means safe, steady incomes, to fund things like pensions.

The campaign group Leasehold Knowledge Partnership estimates this business is worth up to £500m to the developers each year.

The leasehold system has existed for a long time in England and Wales, especially in blocks of flats. Many leaseholders have long leases, for example for 999 years, and experience no problems.

But the trend for new-build houses being sold as leasehold has accelerated in recent years. While not all house builders use this model, those that do argue it helps make developments financially viable.

But nowhere on Bellway’s website is this system made clear to potential buyers, and Katie feels these facts were not made clear to her. She also says the solicitor – recommended to her by Bellway – made no mention of this possibility either.

Katie says because she bought the house through the government’s Help To Buy scheme, she felt she could trust the process.
]Bellway has not responded to requests for comment.

Homeground – the company that now manages Katie’s freehold on behalf of the investment company – said in a statement it “can usually informally negotiate a price which can often save both time and some of the professional fees”.

“In the rare event we cannot agree, the leaseholder still retains the right to turn to the statutory process, which will establish the price as well as the legal fees they have to pay.”

It’s likely thousands of homeowners could be in a similar position to Katie. Lindsay, who lives on the same estate, bought a house from developers Taylor Wimpey.

The company did ask Lindsay if she wanted to buy her freehold – for £2,600. She declined because she was on maternity leave and felt financially it was not possible.

Two years later she asked about buying it but found it was now £32,000.

“I rang them and said, ‘I’d like to buy it now.’ And they said, ‘It’s not for sale – there’s a private investor who owns it. They’ve got a long-term interest in your property,'” Lindsay explains.

“I turned around and said, ‘I’ve got a long-term interest in my property. It’s my family home, it’s my son’s inheritance, and it’s not yours to just line your pockets with.’

“I feel like I’ve let everybody down because it wasn’t right to buy it when it came. But nobody said this was a one-time offer.

“It might be legal, but it’s not even questionable that it’s immoral,” she adds.

Taylor Wimpey said as it no longer owned the freehold to Lindsay’s house, it did not set the price of the freehold or benefit from the ground rent.

It added that, since the start of this year, houses on its new developments would be sold as freehold-only, except in a small number of cases where it did not own the freehold to the land.

But other developers are still selling new-build houses as leasehold.

Katie and Lindsay do have the option to negotiate with the companies who own their freeholds, but say they do not wish to go down this route. They feel the original prices should still stand.

The law does allow a leaseholder to force their freeholder to sell after two years – if both sides cannot agree a price, a tribunal will decide how much the leaseholder should pay.

However, the leaseholder can also be liable for the legal fees of both parties, meaning further expense to people like Katie and Lindsay.

A spokesman for the Department of Communities and Local Government has told the BBC “it is unacceptable if home buyers are being exploited with unfair charges and unfavourable ground rent agreements prior to purchase.

“We are aware of this issue and will announce radical proposals to reset the housing market in our forthcoming White Paper.”

Beth Rudolf, from the Conveyancing Association, says that if the developers were not clear about the leaseholds, it may be a case of misrepresentation.

“Anyone marketing a property is covered by consumer unfair trading regulations, which means that if there is anything that would affect their decision-making process, then they should be advised of that before viewing the property,” she says.

“It’s too late really at the point when they’ve viewed it, because they’ve already fallen in love with it.”

The fight goes on for Katie and Lindsay, who worry their homes are now “unsellable” while this shadow hangs over them.

“Hindsight’s a wonderful thing,” says Lindsay. “I wouldn’t have done it if I had known.”