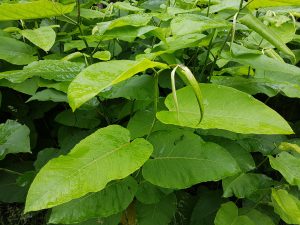 Prior to 2012 surveyors avoided liability by claiming ignorance of Japanese knotweed or the damage that it can cause. This all changed when in 2012 the Royal Institution of Chartered Surveyors published guidance on ‘Japanese knotweed and residential property’.

How do you recognise a Japanese knotweed? The plant forms dense stands of tall canes up to 3m (10 feet) during summer, which die back in autumn. It is an invasive perennial weed that is thought to have been introduced to Britain in the late 19th Century as an ornamental plant. During spring, the plant produces rapidly growing light red shoots resembling bamboo, and can grow to a height of 2-3m, with the rhizome (root system) spreading outwards under the surface for up to 7m from stems visible above ground.

Japanese knotweed is a major problem to property, due to its ability to damage structures and spread rapidly from small fragments. The Environment Agency describes as “indisputably the UK’s most aggressive, destructive and invasive plant”.

The risk to the surveyor report is the absence of plants in the winter when they die back and are not obviously apparent. Individual plants can cover large areas of land, joined up below ground by an extensive rhizome network.

Pieces of plant or rhizome can easily be transported to a new location without awareness by:
1. water – if the plant is growing close to a river or stream
2. moving soil which contains plant pieces
3. dumping such as fly-tipping the removed stems

Not only is the surveyor required to inspect the property but must also consider the adjoining land. Knotweed does not recognise boundaries and needs to be considered carefully.

The Cost to the homeowner
Regrettably, the slightest trace of Japanese knotweed on the property – even on nearby on the street – is a reason to be refused a mortgage

• Treatment costs.
The removal, eradication and disposal of the weed may be expensive but given that the presence of it can impede the sale of your property and/or affect the value, a least-risk approach would be to have it removed by licensed contractors and properly disposed of.

• Refused lending if the mortgage company suspects there is the presence of the weed; and

Japanese knotweed is not on the increase but awareness of this plant is. For this reason and particularly in the coming months surveyors must be diligent.